The Call of Duty 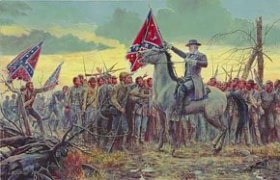 Would you continue in faithful service to a cause that you knew was doomed?  Many people would likely consider it foolish.  To my mind it demonstrates a true commitment to something higher than yourself.  In a word, duty — fulfilling the obligations you have undertaken.  In the final days of the American Civil War, the South’s greatest general saw defeat looming ahead but refused to abandon his duty.  He was General Robert E. Lee of the Army of Northern Virginia.  This is the story of his faithful service — to the very end.

Robert Edward Lee was a true son of Virginia with a proud heritage.  His father was “Light Horse Harry” Lee, one of George Washington’s top cavalry commanders, and his wife Mary Custis Lee was none other than the step-great-granddaughter of George Washington.  From his earliest days there had been instilled in Robert the highest virtues of his day — duty, honor, loyalty.  He attended the United States Military Academy at West Point and served in the U.S. Army for over thirty years.  It was a different age, however, and Lee believed his first loyalty was to his native Virginia.  So, despite his long service and allegiance to his country, when Virginia seceded from the Union in 1861 and issued her call to arms for her sons, he somberly resigned his Army commission and put on the uniform of a Confederate general.

After a year of service in various military capacities, he assumed command of the Army of Northern Virginia, ultimately becoming the Confederate general-in-chief in early 1865.  He became the most beloved commander on either side of the struggle.  Outnumbered and outgunned, he tirelessly served the Confederacy through both stunning victories and devastating defeats.  As the years wore on, however, the tide of war turned in favor of the Union.  Lee knew the end was close.  Through it all, General Lee understood his duty.  As head of the Southern forces, he accepted the weighty obligation to fight on until the South’s civilian leadership said otherwise.

Confederate President Jefferson Davis had not said otherwise, and the Union forces pushed toward a final showdown.  That final struggle began on April 2, 1865 in Petersburg, Virginia, only twenty-three miles from the Confederacy’s capitol of Richmond.  After nine months besieging Lee and his entrenched army, Union forces under Ulysses S. Grant broke through the Confederate defensive fortifications.  Lee was left with no choice but to order the evacuation of his army and the Southern government.  Union forces captured Richmond the next day.  Even though the end was near for the South, Lee would not give up.  He would not give in.  He would continue to do his duty.

General Lee never forgot that he had a duty to his country, but he also fully understood that he had a duty to his men.  He believed that duty to both required him to make an attempt at escaping the pursuing Union soldiers.  His plan was to march to a nearby railroad station to obtain provisions before marching to North Carolina to link up with the Confederate Army of Tennessee, the other surviving Southern army of importance.  When he and his soldiers reached the station, however, they found ammunition instead of food.  One Confederate officer reported that the sight paralyzed Lee with shock.  Seeing his soldiers’ near starvation, Lee sent wagons out into the countryside, but they returned with only meager amounts.  Distributing what was available, Lee ordered his men to continue their march west to get around the surrounding Union forces.  Then came April 6, 1865.

Knowing that he owed it to his soldiers to continue the retreat, he had the Confederate cavalry seize control of two Appomattox River bridges.  He had other parts of the army continue to move west.  In the early afternoon, some units reached a small stream called Sayler’s Creek.  Unexpectedly, they found themselves facing a strong force of Union cavalry and infantry.  The Union forces immediately engaged the Army of Northern Virginia.  The Confederates fought back with fierce determination, for they were fighting for their lives.  Fierce determination could not overcome superior numbers though.  Hungry, tired, without sufficient ammunition and in the face of annihilation, the Southerners ran for their lives as Union forces closed in around them.  Nearly six thousand soldiers were captured, including eight generals.

As the survivors made their way up the creek bank, they found General Lee sitting on his horse, Traveler, watching the disastrous collapse.  Turning to one of his subordinates, Lee gasped in horror and whispered, “Has the army been dissolved?”  It certainly appeared that way.  Many of the surviving soldiers gathered around Lee and looked to him as a child would to a beloved parent for comfort.  “Marse Robert,” as his soldiers affectionately called him, understood he still had a duty to bolster his soldiers’ spirits.  Seeing a discarded Confederate flag lying nearby, Lee grabbed it and waved it above him.  As he did so, the wind blew hard and fully unfurled the flag.  The sight seemed to reinvigorate the men’s willingness to follow him to the end.

At this moment, the darkest point yet in his years of service, the end seemed inevitable.  Lee asked one of his officers what the country would think of him if he surrendered.  The officer responded that Lee had become the country to his soldiers, meaning that their only allegiance was to Robert E. Lee himself.  He led his men west for two more days, even as Ulysses S. Grant sent messages advising him to surrender.  Then on the morning of April 9, 1865, Palm Sunday, General Lee and the Army of Northern Virginia found themselves surrounded by Union forces near Appomattox Court House.  To continue to fight would only result in the army’s needless slaughter.  He knew there was no alternative, and there was no honor in sacrificing more lives.  He owed it to his soldiers.  The idea of surrender made him heartsick though.  It is reported Lee said to one officer, “There is nothing left for me to do but go and see General Grant, and I would rather die a thousand deaths.”  His duty to his country completed, his duty now consisted entirely in protecting his men.

As part of the terms of surrender, Lee ensured his soldiers could go home without fear of imprisonment.  The officers could keep their weapons, and both they and those in the cavalry and artillery could keep their personal horses.  They also kept their honor.  The beloved general urged his soldiers to go home and become loyal citizens in their once again united country.  He himself became president of Washington College in Lexington, Virginia.  It was later renamed Washington and Lee University.  Lee would die just five years after the war ended.

Throughout the war, and especially by his actions in the last days, Robert E. Lee always strove to do his duty as he saw fit.  He faithfully served the Confederacy and his men until the end.  He famously said, “Duty is the sublimest word in the English language.  Do your duty in all things.  You cannot do more.  You should never wish to do less.”  Still memorized today by those young Americans who attend the country’s top military academies, this quote reflects a core principle of those who serve their country and perfectly sums up the life of the man who said it.

One response to “The Call of Duty”