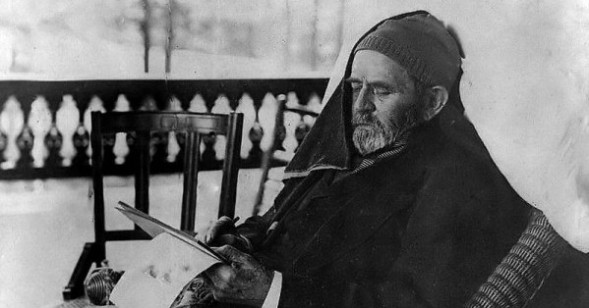 There is probably no more important personal responsibility than providing for one’s family.  At times that may even mean using the last of his or her strength.  In the early 1880s, there was an American hero whose family faced a perilous situation.  He had been reckless with his finances and now faced ruin at the same time he was dying of cancer.  He was driven to ensure the welfare of those he left behind, so he penned a successful autobiography that told of his rise to become general and President of the United States.  He was Ulysses S. Grant.  This is the story of his final battle to save his family.

Ulysses S. Grant enjoyed one of the most remarkable careers of any American.  In seven years, he rose from complete obscurity to the heights of prominence.  As the son of a poor Ohio family, he had an undistinguished record at the United States Military Academy at West Point.  His later problems with alcohol forced him to resign from the army.  Failing at everything, he was reduced to working as a clerk in his father’s leather goods shop.  Then came the Civil War.  He rejoined the army and quickly attained fame for his hard-fought victories at Fort Donelson, Shiloh, Vicksburg and Chattanooga.  In 1864, Lt. General U.S. Grant became the commanding general of the army and led the Union to victory over the Confederacy.  After the war, he served as four-star General of the Army and Secretary of War.  In 1868, Ulysses was elected President.  By any measure, it was a meteoric rise.

He did not, however, succeed as well as a politician.  He was honest, but he relied on men who were not.  His two terms were laden with scandals as multiple officials faced criminal indictment for financial improprieties.  The scandals ruined Grant’s presidency.  Leaving office after his second term, he toured Europe and Asia with his wife and son.  In each capitol he was toasted as a true American hero.  Returning to the U.S., he tried to secure a nomination for a third term as President.  Failing to succeed he left politics for good and settled into retirement in New York City.  Unfortunately, his status as a celebrated war hero and President could not protect him from financial loss.

In 1884, Ulysses S. Grant, famed general of the Union, suffered a crippling blow.  He had invested his entire life savings, nearly $100,000, no small fortune in that day, in a bank on Wall Street where one of his sons served as a partner.  The company went bust, and Grant was left with almost nothing.  The head of the bank was eventually convicted of embezzlement and sentenced to prison, but that did little to help Grant or his family.  At one point the general even had to promise his personal sword as security for a loan.  When he could not pay it, he lost the sword.  To help him out, the U.S. Congress passed an act restoring his rank of general.  This allowed him to collect a pension.  Grant knew, however, that such an act of generosity would only go so far in providing financial security for his family.  He needed to find another way.

Unfortunately, at this moment of crisis, Grant learned time was running out for him.  His years of constantly smoking cigars finally caught up with him.  Many Union soldiers remembered seeing him calmly puffing away in the midst of battle.  Doctors now diagnosed him with throat cancer.  Hearing the news, Grant became even more desperate to rescue his family from destitution before he died.  Suddenly, he was presented with a most generous and unexpected offer.

For many years, friends and admirers had been urging him to write his personal memoirs, especially telling his view of the Civil War.  Mark Twain now approached the dying hero with an offer to publish Grant’s autobiography if he would write it.  Grant realized this was his chance to provide a legacy for himself and, more importantly, a fortune for his family.  He set to work immediately.  Through the spring and early summer of 1885, he worked tirelessly on the manuscript even as his condition steadily weakened.  He wrote page after page telling of his West Point days, his early military career and finally his contribution to the Union cause and ultimate victory.

In mid-June he moved with his family to a cottage at Mount McGregor in the Adirondack Mountains not far from Saratoga.  Not long after settling in, Grant completely lost the ability to speak as the cancer ravaged his body.  All he could do was sit on the porch of the cottage and write.  He was determined not to succumb to the cancer until the task was complete.  He would not leave his wife and children to bear the cost of his personal failures.  In early July he wrote the last pages.  His life story now finished, the former President and general died just a few days later on July 23rd.  His memoirs proved to be a bestseller, selling hundreds of thousands of copies, and earning the family almost $500,000.  The proceeds were more than enough to reestablish the Grant family fortune.

After he died Ulysses S. Grant was buried in the largest mausoleum in North America on Upper Manhattan in New York City.  His legacy as the architect of Union victory in the Civil War continues to this day.  He served as President, but at heart he was a warrior.  Perhaps there was no better proof than his determination to win the fight to finish his memoirs.  He endured the final months of pain and suffering just as he had endured four years of hardship and bloodshed to bring the Union victory in the Civil War.  Providing for his family was, for this man, as much an act of honor as serving the Union he helped preserve.  He did not live to see all the fruits of this personal victory, but Ulysses S. Grant did succeed in his final fight.

2 responses to “The Last Fight”