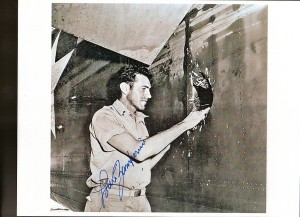 Trials and tribulations plague everyone, but every once in a while someone comes along whose story of survival is so extraordinary that it merits special attention. There was a young American airman in World War II who endured almost unimaginable terrors during a protracted life or death battle, the winning of which would only lead to further ordeals. It would take all of his strength just to make it through each day, but his struggles and eventual victory not only made him legendary but also enabled him to inspire others. His name was Louis Zamperini. This is the story of his forty-seven day fight to survive the dangers of the Pacific Ocean.

From the beginning, Louis Silvie “Louie” Zamperini had to fight his way up to overcome challenges. Born to Italian immigrants in January 1917 in New York, he moved to Torrance, California with his parents and three siblings at the age of two. He made a series of bad choices during his adolescence, and it was not long before he was engaged in petty theft and appeared on the edge of ruin, a full-blown juvenile delinquent. His older brother Pete persuaded him to become active in track in an effort to stop his downward spiral, and stop it he did. Called the “Torrance Tornado,” Louie set his high school’s track record, the state record and the national high school record in the 1934 Southern California Track and Field Championship in the mile run before switching to the five thousand meters race. He became the youngest distance runner to ever make the U.S. Olympic Team. At the 1936 Berlin Olympics, he failed to medal in the event but caught the attention of everyone, including Adolf Hitler who met Louie after the race, by finishing the final lap of the five thousand meter race in only fifty-six seconds. He was poised to make history, but history had other plans for him.

Louis believed he had a bright future in track, but the outbreak of World War II started him on a new path in life. He had returned home to California to attend USC with his sights set on becoming the first person to run the mile in under four minutes. As war clouds gathered on the horizon however, Louie was forced to abandon his dreams, and in late 1941 he joined the Army Air Corps as a bombardier. He learned how to operate the Norden bombsight, a computer that used air speed and altitude among other variables to calculate the optimal moment for unleashing bombs. Upon the completion of his training, he was commissioned a second lieutenant and assigned to the crew of a B-24 Liberator in the Seventh Air Force. After saying good-bye to his family, he travelled first to Washington State to join the crew of the Super Man, as the bomber was named, and then to Hawaii. Little did Louie know that he was about to endure the first of several great trials in his life.

Louie’s time in the Pacific would be one of the most turbulent periods he ever endured. Arriving in late 1942, Louie almost immediately saw action against such Japanese-controlled islands as Wake and Tarawa. He also experienced the effects of combat on aircraft and airmen. His own aircraft was shot up so badly on one mission that the uninjured crewmembers had to abandon it. It was poor timing because on the morning of May 27, 1943 the crew was ordered to board a substitute aircraft, Green Hornet, and participate in a rescue operation. A few hours into the search, one crewmember noticed there was a disproportionate amount of fuel in each of the tanks. As the pilot attempted to equalize the tanks, engine failure occurred. Louie raced to the rear of the airplane to assume a crash position. Moments later the B-24 hit the water.   Louie was entangled in the plane’s wires before he was finally able to break free and swim to the surface. He was in the middle of the vast Pacific.

Louie Zamperini had survived the crash, but now he realized he had to survive the dangers of being lost at sea. Only the pilot and the tail gunner had survived along with him. Seeing two life rafts nearby, Louie climbed aboard one and helped the other two aboard the other one. Taking charge of the small party, Louis found the raft held only a few chocolate bars and a few half-pint tins of water. There was no other food or drinks to be found. Louie told his comrades they could only have a bite of chocolate in the morning and a bite in the evening, and they could only drink two or three sips of water every day. As the raft began drifting west from the crash site, sharks began to swim around the three men, close enough for the men to reach out and touch. Louie tried to sleep that night, only to awake the next morning and discover that the tail gunner had eaten all of the chocolate. Now there was no food at all, and the temperature was rising fast. The next few days passed slowly as the men did their best to survive. The sighting of a B-24 on the third day briefly gave them hope, but Louie’s efforts to gain their attention met with failure. Each of the men knew they had to be rescued soon as the next day saw them finish the small amount of water they had. With no food and no water, the three survivors’ health quickly declined. Days of drifting turned into weeks.

As the weeks passed, the rafts continued to float west, and Louie and his companions waged a battle for their physical and mental survival. Each day they sat in the scorching sun stung by salt and wind coming off the ocean. They used a rainstorm to obtain drinking water and cleverly caught several birds and fish to alleviate their hunger. Louie engaged his companions in a series of questions and stories, including tales of meals his mother had prepared, to keep their minds sharp.   He grasped the necessity of keeping their spirits high in spite of their dismal predicament. By the end of the twenty-eighth day, the men had lost much weight and had unkempt beards. All three, especially Louie, offered daily prayers for their deliverance. At one point, he even promised God he would serve him his entire life if they were rescued. They could not have known that by that time they had drifted into Japanese territory. They were about to experience human contact for the first time in weeks, though that contact would result in dangerous encounters for the men.

As the four-week mark approached, Louie and his two companions were almost at the end of their tether when they finally glimpsed an approaching plane. Knowing it might not work, they decided to try and signal it using a flare gun. The pilots spotted them and, to the men’s horror, strafed the helpless airmen. The plane was Japanese. With no choice, Louie threw himself into the ocean while the other two huddled in the raft. Bullets tore through the raft and into the water. Fortunately for Louie, the bullets’ impact was lessened below the surface, but as he looked down, he saw sharks coming straight for him.   He kicked and punched at them until they swam away leaving him unharmed. He climbed back up on the raft to rejoin his comrades only to find one of the rafts destroyed. The three men huddled together on the remaining raft and attempted to patch the raft and refill it with air. As if that were not hard enough, they had to fend off sharks as they were doing it. At times sharks literally jumped up on the raft, which forced the men to use what little strength they had left to push them off. Louie decided there was a more practical way to deal with them. He killed one of the small sharks, and the three ate the liver, the only part humans can consume. It did little to help them though, as by the thirty-third day the tail gunner was dead and the other two were mere skin and bones. Finally, on day forty-six, Louie and his surviving companion saw a group of islands directly in front of them. They had drifted almost two thousand miles to the Marshall Islands. Now they were prisoners of the Japanese.

Unfortunately, Louie’s struggles were not over yet. He found himself transferred from camp to camp. At one, the Japanese found out exactly who he was, and despite his weakened condition, they forced him to race against several Japanese runners. The Japanese also sought to use him for propaganda purposes, but he refused to cooperate. In late 1944, he arrived at Omori POW camp in Tokyo Bay. He was greeted by Corporal Mutsuhiro Watanabe, who was known to the POW’s as “the Bird” and who would make it his personal mission to break Louie’s spirit. Louie became the Bird’s “number one prisoner” singled out almost daily for brutal beatings and humiliation. Louie’s defiance only infuriated the Bird more and resulted in even more savage beatings. At one point, the Bird forced other prisoners to punch Louie after several thefts had occurred. The Bird also forced him to hold a wooden beam up as punishment for visiting the doctor without permission. Louie’s patience with the Bird had run out, and along with others, he considered killing his tormenter. The dropping of atomic bombs on Hiroshima and Nagasaki prevented him from committing such an act. Days later, Louie and the others received word that the war was finally over.

The fighting may have ended, but Louie soon discovered the scars of war took longer to heal. With victory achieved, Louie returned home in October 1945. Reporters quickly besieged him, and he sought relief in alcohol. His drinking intensified his natural aggression, and he began picking fights. His marriage to Cynthia Applewhite suffered as a result, and she finally decided to divorce Louie. She changed her mind though after hearing Billy Graham speak and encouraged Louie to hear him. He finally gave in and heard Graham describe situations similar to what he had endured. He surrendered his life to Christ and honored his promise made to God on that tiny lifeboat in the Pacific. He became a Christian speaker telling his story to audiences, founded the Victory Boys Camp to reform ruffians like him, and traveled to Japan to forgive his former captors. Louis Zamperini died on July 2, 2014 at age ninety-seven, having survived all that life could throw at him.

Louie Zamperini’s life stands as a testament to the fight to survive that is instilled within us. He certainly went through more life or death struggles than most. He often lingered on the very point of death only to somehow pull himself back from the brink. The ordeal he overcame while adrift only led to further torment. He suffered unspeakable cruelty at the hands of his fellow man, and he not only endured but eventually found the inner strength, by the grace of God, to forgive those who had tortured him. His later life was dedicated to helping others through their life challenges. Louie Zamperini was not just a survivor of incredible trials and tribulations but a survivor of the highest order — one who used his personal experiences to inspire others to do the same.

2 responses to “A Real “Survivor””