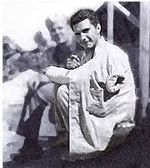 On June 6, 1944 — D-Day — Allied forces stormed the beaches of Normandy, France as part of Operation Overlord, the long-anticipated invasion of Nazi-controlled Europe. Wave after wave of American and British troops attacked the entrenched Germans, and by nightfall the Allies had gained a foothold on the continent. In the ensuing weeks they pushed into the heart of Nazi territory, and within a year, Germany had surrendered. Consequently, D-Day is considered the beginning of the end of World War II in Europe. It is often forgotten, however, that a second pivotal invasion occurred days after Normandy. On June 15th U.S. infantry and Marines struck Saipan, part of the Mariana Islands in the Central Pacific, in the first part of their drive on Japan’s Home Islands. As on so many Pacific battlefields, American GIs opposed an enemy who fought to the death. After three weeks of brutal combat, the remaining Japanese launched the traditional “banzai” attack — choosing death rather than shame as prisoners. Not all Japanese died in battle, however. Due to the audacity of a private from Los Angeles, California, nearly one thousand enemy combatants surrendered. The private’s name was Guy Gabaldon. This is the story of how he distinguished himself, in legendary fashion no less, as the “Pied Piper of Saipan.”

Guy Gabaldon owed his success on Saipan to his years growing up in East L.A. He was born in the Southern Californian metropolis in late March 1926 to Mexican parents, and as a boy, he continually pressed boundaries, such as jumping from buildings and hopping from trains. His specialty, however, was street fighting, particularly after he joined the multi-ethnic “Moe Gang.” He once had his nose broken twice in the same day, and at another point was even kicked out of school. Still, he continued to defy authority, and it looked like he was on the road to ruin as a juvenile delinquent. All that changed when he turned twelve-years-old. Entering Hollenbeck Junior High School, he befriended Lane and Lyle Nakano, twin Japanese boys, who brought Guy into their tight-knit, loving family. He soon became an adopted member of the family, living with them off and on for several years. He attended Japanese language school with the boys and immersed himself in Japanese culture. He even developed a love for Japanese cuisine. Consequently, Guy felt as much at home in the Asian community as he did among Hispanics. Then in December 1941 his world turned upside-down with Japan’s attack on Pearl Harbor and America’s entry into World War II.

Fearing Japanese-Americans would support their homeland, President Franklin Roosevelt decided to put these perceived enemies in internment camps across the U.S. The Nakanos were sent to Wyoming. Guy pleaded to go with them, but was refused. Distraught, and with nowhere to turn, the sixteen-year-old dropped out of school and travelled north to Alaska. He worked for a year at a fishing cannery, but as the months passed, he grew restless and yearned to join in the struggle against totalitarianism. Returning to California in 1943, he sought to enlist in the Navy but was rejected due to small stature — he only stood five feet, three inches — and a perforated eardrum. Undaunted, he turned to the Marines. On March 22nd — his seventeenth birthday — Guy Gabaldon entered military service as a private first class in the Marine Corps. He reported to Camp Pendleton, near San Diego, California, for basic training. When Guy’s superiors found he spoke Japanese, he was sent to the Enlisted Marine Japanese Language School at Camp Elliot, also in San Diego. Upon graduation, Gabaldon joined the Headquarters and Service Company of the 2nd Marine Regiment, 2nd Marine Division and was soon bound for combat in the Central Pacific.

After a brief stop in Hawaii, Gabaldon and the 2nd Marine Division sailed for the Mariana Islands, part of Japan’s defensive perimeter. Once in American hands, the islands could serve as a base from which B-29 Superfortresses could strike Japan. On June 15, 1944 Gabaldon and his fellow Marines stormed Saipan, the first critical island in the chain. Charging the rocky beaches, they met murderous artillery and machine gun fire from Japanese defenders. Comrades were soon falling all around Guy, but he continued to advance. No matter how fiercely the Marines pushed, however, the Japanese tenaciously held their ground. In desperation, Guy bombarded Japanese defenses with hand grenades, ultimately killing thirty-three combatants. After hours of combat, Gabaldon and his comrades drove Japanese warriors from the shoreline. Yet, Guy knew savage fighting still lay ahead. Enemy troops had resolved to kill seven Marines for every one of their own. Realizing such warfare could cost thousands of casualties, American and Japanese alike, Gabaldon determined to pursue a different tactic — and in so doing made history.

That night, displaying the same disregard for authority that marked his youth, he departed headquarters and embarked on a scouting trip across the island. Moments later, Guy encountered two Japanese soldiers and began conversing with them using backstreet Japanese. He convinced them of the futility of suicidal attacks against the Americans and urged them to accompany him to U.S. lines. They agreed. He expected congratulations but was instead threatened with court-martial for leaving his post. Despite the warning, Gabaldon undertook another mission the next night. This time, he made his way to a Japanese-occupied cave, one of hundreds that dotted the twenty-five mile length of Saipan. He killed the guards at the cave’s mouth and yelled down into the cave. Warning the underground enemy they were surrounded, the gutsy private promised fair treatment if they surrendered. As morning dawned, he marched fifty Japanese prisoners into camp. Amazed by such audacity, and impressed by the scope of his accomplishments, superiors allowed Gabaldon to continue his “lone-wolf” operations. In the ensuing days, he brought in other prisoners by providing gifts of candy and cigarettes as well as promising humane treatment while in captivity.

By July 6th, three weeks after landing on Saipan, Gabaldon and his comrades had pushed Japanese soldiers to the northern end of the island. One story from that night tells of how, on yet another trek, he overheard Japanese troops discussing a planned all-out attack in a last-ditch effort to stave off defeat. Guy immediately returned to headquarters and alerted his superiors of the coming assault. Due in part to his warning, the Marines soundly repulsed the charge. With victory in sight, American forces advanced to Banzai Cliffs. Reaching the site on July 8th, Guy watched in shocked horror as thousands of civilians leapt to their deaths. Believing Japanese propaganda that Americans would eat their children, the civilians rejected his pleas to stop and continued their mass suicide. Seeing one woman throw her baby onto the rocks, he could not stand by any longer. Running forward, Guy grabbed hold, and no matter how hard she fought, he refused to let go. He succeeded in pulling her away from the edge and guided her to an American camp. (Sadly, she lost her mind after realizing the Americans were not beasts — causing Guy to wish he had let her jump.) Moments later, he left the heartrending scene and walked along the cliffs. Meeting two Japanese soldiers, he told them further resistance was futile — flamethrowers and Naval vessels would destroy them if they took refuge inside caves. He then pointed to the cliff side and the dead bodies underneath and berated them for encouraging civilians to join them in death, which he said was not part of their bushido military code. Finally, one soldier agreed to find an officer and bring him to Gabaldon.

A short time later, a dozen Japanese exited a nearby cave, and for the first time, Guy felt a surge of trepidation. He realized he could not bluff them into surrendering, as he had on other occasions. Suddenly, inspiration struck him. He told them Marine General Holland “Howling Mad” Smith, whom he termed a Shogun, or commander-in-chief, greatly admired the Japanese’s bravery and had ordered safe haven be given to those survivors of the previous day’s banzai attack, which he said would go down in history. Guy then promised the troops would be sent to Hawaii to live out the war in comfortable surroundings. To his surprise, and delight, the Japanese commander in the cave, a lieutenant, warmly responded to this promise. He asked Gabaldon about medical treatment, and the private promised immediate attention. The lieutenant nodded his thanks and agreed to surrender. Leaving four of his men, he returned to his cave. An hour later fifty men came out and demanded water and medicine. Shrewdly, however, Gabaldon refused until all prisoners exited. The lieutenant agreed, and hundreds of Japanese, military and civilian, poured out. Guy was shocked at the seemingly endless line of marchers, but he quickly divided the groups and established a place for the wounded. As the crowd swelled, he realized he could not manage on his own and feared a possible revolt. Spotting a group of Marines on a nearby hillside, he ordered one of the prisoners to wave a white flag in their direction. Moments later, the group joined Gabaldon and helped him disarm the prisoners. When a full count was taken, Private Guy Gabaldon had single-handedly captured over eight hundred Japanese soldiers and civilians — almost eight times as many prisoners as that taken by Sergeant Alvin York, for which he received the Medal of Honor during World War I. When comrades learned of this astonishing feat, they labeled Guy Gabaldon the “Pied Piper of Saipan.”

Following his celebrated accomplishment, Private First Class Gabaldon joined the attack on Tinian, another island in the Mariana chain. There, as on Saipan, he engaged in “lone-wolf” operations and brought in hundreds of Japanese prisoners. He later returned to Saipan where he helped subdue Japanese guerrillas. In the course of this action, he was wounded by machine gun fire and sent home. By then, he had captured over fifteen hundred prisoners. For such heroism, he was awarded the Silver Star, the third highest medal for valor, which was later upgraded to a Navy Cross, the second highest award. Given an honorable discharge, Gabaldon returned home where he pursued various business ventures. Throughout his life though, he was tied to Saipan, living there for twenty years beginning in 1970. Nor was he shy about discussing his exploits, publishing a book on the Battle of Saipan in 1990. He also won numerous awards, including the prestigious 2005 Chesty Puller Award given by the World War II Veterans Committee. The greatest honor, however, came in 1960 when Hollywood released Hell to Eternity, which told Gabaldon’s story to the entire country. Fame and glory, including repeated efforts to see him awarded the Congressional Medal of Honor, continued to follow the “Pied Piper of Saipan” for much of his remaining life. Guy Gabaldon died at the age of eighty in 2006, interred with full military honors at Arlington National Cemetery.

Guy Gabaldon truly lived up to his nickname. Much like the character in the “Pied Piper of Hamelin,” who used his music to lure rats, and later children, out of town, this modern “Piper” used his linguistic skills and persuasive reasoning to entice Japanese soldiers into surrendering, thereby preventing catastrophic loss of life. Having been exposed to the Far East culture as a boy, he understood the Japanese mindset, yet he saw no need for the soldiers to needlessly sacrifice themselves. Rather than employing brute force, Guy used cunning, courage, and his God-given talents to execute a strategy that not only proved phenomenally successful but also remains today one of the greatest individual triumphs in American military history. With a nickname like the “Pied Piper of Saipan” and the incredible wartime story to go along with it, perhaps the “legend” of Guy Gabaldon will live as long as the Medieval Piper of old.