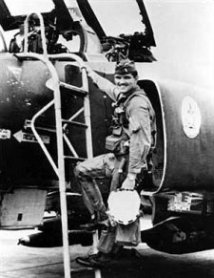 Times of extreme peril reveal a person’s true inner strength. One of our modern wars provides a most compelling example for Americans to follow. In the Vietnam War, there was an Air Force officer who endured incredible physical and mental hardships, but he remained resolute to the very end. Despite serious injury, capture and torture, this young officer resisted the enemy at all costs, even when he was on death’s door. He eventually died as a prisoner of war, but his memory and the story of his indomitable spirit continues to live on to this day. His name was Lance Sijan. This is his story of sacrifice and personal bravery, truly above and beyond the call of duty, in the most trying of times.

Lance Peter Sijan was a man who learned at an early age the importance of perseverance and seeing something through to the end. Growing up the oldest of three children, he determined to chart his own course and keep to his heading despite challenging turbulence. While in high school, Lance worked against fierce competition to get the lead roles in The King and I and Around the World in Eighty Days. He also became his high school’s student government president, his graduating class’s commencement speaker, and tight end and captain of the city championship team in Milwaukee, Wisconsin.

After high school, Lance attended the United States Air Force Academy in Colorado Springs, Colorado. While there, he played football for three years before leaving the team to concentrate on his academic studies during his final year. Four years of rigorous studies, military instruction and mental toughening only strengthened his commitment and dedication. Upon graduating, he was commissioned as a second lieutenant and began pilot training with the goal of becoming a fighter pilot. When he had completed training, his orders assigned him to the 480th Tactical Fighter Squadron, flying F-4 Phantoms in South Vietnam.

Arriving in South Vietnam, Lieutenant Sijan was immediately thrust into the deadly environment of flying a fighter aircraft in combat. One of the targets Lance often bombed was the Ho Chi Minh Trail, the jungle pathways between North Vietnam and neighboring Laos the North Vietnamese used to move soldiers and supplies to the south. It was a high threat area, and oftentimes not all of the planes returned. By early November 1967, he had completed nearly fifty-two missions, and because of the high attrition rate, each day he mentally and physically prepared himself to evade capture and survive if he had to eject over enemy-occupied territory. His training was soon put to the test.

On the evening of November 9, 1967, Lt. Lance Sijan prepared for a familiar bombing mission over Laos. Boarding an F-4 Phantom as the aircraft’s rear cockpit pilot, he took off with Lt. Colonel John Armstrong. Initially, all went as planned, but as the plane reached the target, North Vietnamese antiaircraft artillery filled the sky. Missing the target on the first pass, Colonel Armstrong was in the middle of his second pass when an explosion rocked the aircraft. At five hundred miles an hour, Lance barely had time to eject as the plane literally disintegrated around him. As his parachute opened above him, Lance prepared himself to go from the high tech world of a fighter cockpit to a prehistoric, inhospitable jungle world. Moments later he tore through the triple canopy forest and smacked a hard limestone karst formation that jutted from the jungle floor; immediately, he was knocked unconscious. When he woke up, he discovered his left leg broken below the knee, three dislocated fingers on his right hand, multiple deep cuts on his forearm, and a severe head injury, resulting in a concussion.

Despite his injuries, Lance remained optimistic about being rescued and attempted to direct the rescue aircraft to his exact location. In radio contact with rescue pilots, he gave clear and precise information as he discussed his situation. Unfortunately, due to rugged terrain and enemy troops in the immediate area, the initial rescue operations failed. Now stranded in the Laotian jungle, Lance evaded capture and continued to coordinate the rescue attempts with his survival radio. Several days passed and neither the Americans nor the North Vietnamese found the young lieutenant. Meanwhile, he was slowly dying of thirst.

Finally, Lance decided he had no choice but to crawl through the jungle to find water. First, however, he had to construct a temporary splint for his leg using his meager supplies. Having done so, he began the laborious process. Continually slipping from consciousness, it took him nearly a week just to crawl six hundred yards. As he crawled, he chewed the leaves of fern bushes as well as green leeches and white beetle grubs. At last, he found a small spring and quenched his thirst. Satisfying that need, he continued to crawl, often until exhaustion overcame him. He hoped to contact his fellow Americans and arrange for a rescue. Over the next six weeks, Lance struggled through the jungle, pausing long enough only to drink a little water. He was alone, badly injured, and slowly dying — but he was not broken.

Forty-six days after he was shot down, on the morning of December 25, 1967, North Vietnamese soldiers finally captured Lance Sijan. A group of soldiers guarding a truck convoy discovered him lying in the middle of the road. The North Vietnamese transported him to a makeshift aid station and holding area and fed him small quantities of food. Despite having little strength, several days later Lance managed to overpower his guard, take the guard’s weapon, and drag himself into the nearby jungle. The North Vietnamese immediately set out to recapture him and succeeded not long after, severely beating him for his escape. Not taking any chances this time, the guards imprisoned him in the “Bamboo Prison” just outside of Vinh, North Vietnam. At the new prison, Lance was deprived of medical attention. Two American cellmates cared for him, but his physical and mental health began to deteriorate. He knew he was growing weaker, but he continued to attempt escape from the new prison. Each time, he was intercepted and savagely beaten. The North Vietnamese then moved him one more time.

In early January 1968, Lance and his two cellmates were transported to Hoa Lo Prison, the infamous Hanoi Hilton. By the time he arrived, Lance was near death, but even in his helpless state he resolved to plan one last escape attempt. Each time his companions were escorted to the interrogation room, he insisted they observe guard movements and possible exits out of the prison. He also tried to make his own attempts, only to be stopped by his friends. His continued willpower to survive despite his desperate condition amazed the other POW’s. Lance’s defiant spirit never wavered, but even unquenchable resilience could not heal the physical trauma that had been inflicted on him. On January 22, 1968, alone in his prison cell, Lieutenant Lance Sijan died of pneumonia, untreated wounds, and malnutrition. He finally attained his long sought freedom.

Lance Sijan may have died in North Vietnam, but the country he had so gallantly served did not forget his memory. We know his inspiring story because of the determination of his fellow POW’s to ensure his legacy and honor his sacrifice. Eight years after his death, in March 1976, President Gerald Ford awarded the Congressional Medal of Honor posthumously to Lance Sijan. He was the first graduate of the Air Force Academy to win America’s highest award for bravery. Neither did the Air Force Academy forget his sacrifice. Today, there is a dormitory named after him, and cadets learn the compelling details of his life. The United States Air Force also created the prestigious Lance P. Sijan Award to honor individuals who demonstrate the highest qualities of leadership. The award is a fitting tribute to a man who endured unbearable agony but never lost his fighting spirit. That same spirit should inspire all Americans to follow Lance Sijan’s example and persevere until the very end.