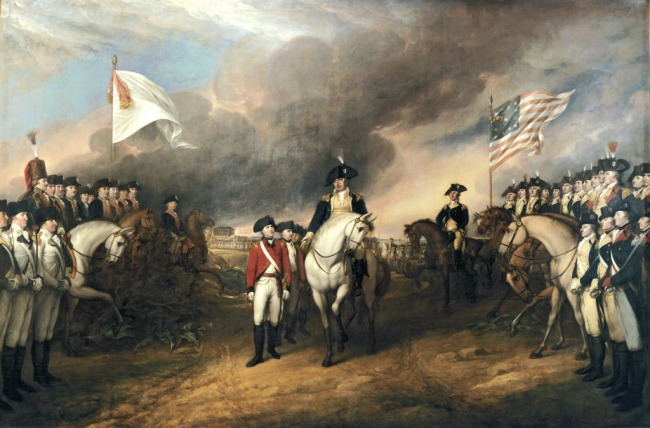 One of the key principles of the Christian faith is a belief in redemption — the act of buying back, releasing from blame or debt. The end result is salvation. The principle applies in a nonspiritual realm as well. Sometimes an individual has to prove his worth and reclaim his reputation after a major failure. In the months leading up to the last major battle of the American Revolution, there was an American officer who sought to restore his good name after suffering the worst defeat of the war. His exertions came to an end with a giant crescendo in the final days of the conflict. His name was Benjamin Lincoln. This is his story of failure and ultimate redemption.

It was in his early life that Benjamin Lincoln first established a reputation for himself. He spent his young adulthood making the New England family farm profitable before turning an eye to public service. He served his hometown of Hingham, Massachusetts in a number of capacities, such as town clerk and as the adjutant of the town militia. As American protests over British policies mounted, Lincoln assumed leadership of the town’s protests. He was eventually confirmed as the secretary of the Massachusetts Provincial Congress. When fighting broke out in 1775, the forty-three year old Lincoln received command of Massachusetts’s forces. In that position, he so impressed General Washington that he was appointed a major general in the American army. He fought the British at Saratoga where he led an attack and was wounded in the right ankle for his efforts. As he recovered, he received the thanks of his country. As a sign of appreciation, the Continental Congress assigned him to command the American Southern Department.

Soon after Lincoln’s appointment, the Southern Department became a critical battlefront of the Revolution. Having failed to achieve victory in the north, the British shifted their strategy to the south. Believing there was a significant Loyalist majority in South Carolina and Georgia, British commanders decided to invade and capture those states before slowly marching north and crushing the colonials for good. It would be General Lincoln’s job to thwart the British southern strategy. The task would be difficult, as Lincoln discovered upon his arrival in Charleston, South Carolina. The majority of the American southern army consisted of militia; there were only a few regiments of Continental soldiers. Lincoln sent out requests for reinforcements, but his requests did not come soon enough to stop the British from capturing Savannah, Georgia. Lincoln attempted to retake the city, but after suffering heavy losses in the attack, he withdrew his forces to the defensive fortifications around Charleston.

As the largest and most important city in the south, Charleston was a city of vital importance for both the Americans and the British. As a result, Lincoln was under pressure to keep the British out. Knowing he was about to face the full might of the enemy’s army, he immediately set out to strengthen the fortifications around Charleston. He was in the midst of doing so when the British arrived and began to construct their own fortifications. Lincoln and his soldiers found themselves under siege. Every day, the British inched closer to the main American lines. As the weeks progressed, British regulars attacked critical forts and supply lines around the city, thus tightening the noose. With no hope of reinforcements or escape, Lincoln finally had to surrender his army and the prize city of Charleston on May 12, 1780. Not merely content with the capture, the British insisted on humiliating the Americans by refusing to allow them the full honors of war, prohibiting the soldiers from marching out under their own flags and carrying their muskets with pride. It was a humiliation the Americans would not forget.

Lincoln’s surrender was the worst blow ever to befall the Americans in the Revolutionary War — the British captured not only the strategic port of Charleston but also five thousand soldiers and a plethora of military supplies. While the individual soldiers were kept as prisoners of war, Lincoln and his senior officers were paroled, honor bound to refrain from participation in the conflict until exchanged for high-ranking British POW’s, and granted safe passage to the American capital of Philadelphia. Having left the capital in 1778 a celebrated hero, he returned in 1780 as a failed commander. He arrived to find the capital buzzing with conversation about the surrender. Most Americans had considered Charleston a fortress not easily taken. Some leaders were full of nothing but criticism and contempt for the loss of such an important city. To Lincoln’s surprise, however, he had many defenders, including several South Carolinians. Despite the support, he keenly felt the disgrace and sought a way to restore his reputation.

Like many American officers, Benjamin Lincoln’s reputation was sacred to him. Even though he was formally a prisoner of war, he tried to clear himself of any wrongdoing in the loss of Charleston. He urged General Washington to convene a military court of inquiry to investigate him. To his disappointment, Washington delayed the proceedings, and the matter was never resumed. Lincoln had little to do until he was officially exchanged and released from captivity in November 1780. Once that release had occurred however, he returned to military service intent on reclaiming his honor. His first assignments included such tasks as recruiting new soldiers and advising Massachusetts’s leaders on defense. He wanted to lead an army though.

The moment Benjamin Lincoln had waited for finally came in the fall of 1781 after he rejoined the main American army. With the support of a French navy and army, General Washington determined to attack the British army commanded by Lord Charles Cornwallis at Yorktown, Virginia. As the army began to move, Washington ordered Benjamin Lincoln to lead the way. Lincoln led the advance through New York, Pennsylvania, Maryland, and finally Virginia. The march was completed by the beginning of October 1781, and Lincoln once again found himself involved in a siege. This time, the outcome would be different. This time, it was the British who had no alternative but to surrender. As the surrender negotiations took place, the Americans remembered the humiliation inflicted on Lincoln’s army at Charleston, and now they insisted on returning the favor. The British were denied the honor of marching out under their flags and shouldering their muskets.

On the afternoon of October 19, 1781, the British army marched with furled flags between the American and French armies. It is said that the British bands played “The World Turned Upside Down.” Claiming to be “indisposed,” Cornwallis assigned his subordinate, General Charles O’Hara, to surrender his sword instead. O’Hara first attempted to surrender to the French commander, but the Frenchman simply pointed to George Washington as the proper commander. Obviously dreading the moment, O’Hara approached Washington and presented him with the sword. To the astonishment of many, Washington too refused the sword. Rather, he turned to the man who had suffered humiliation at the hands of this same British army just a year prior. General Benjamin Lincoln stepped forward and took the sword from O’Hara’s hands. He then directed the British soldiers to lay down their muskets. In that moment, Benjamin Lincoln achieved his long-desired redemption.

After the victory at Yorktown, Benjamin Lincoln served in a variety of state and national positions, such as Secretary of War for the government created by the Articles of Confederation, commander of the force that put down Shays’ Rebellion, and a member of Massachusetts’s state convention to ratify the Constitution. He died in 1810 and was mourned by all of Boston. He was considered a national hero. His name is little remembered today, but his moment of redemption is not. In the rotunda of the Capitol building in Washington, D.C. is the painting, The Surrender of Lord Cornwallis at Yorktown. In the painting’s center is General Benjamin Lincoln astride a white horse extending his hand to General Charles O’Hara, who is presenting the sword of British General Lord Cornwallis. All of us can, in some way, relate to Benjamin Lincoln — we all need redemption.